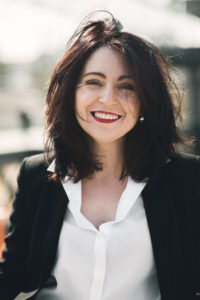 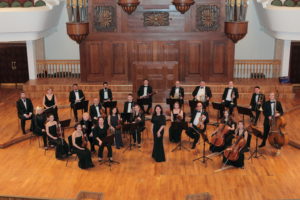 The owner of the Grand Prix of the International Competition The Chamber Orchestra « New Music » was created at the Center of Contemporary Music of Sofia Gubaidulina in 2003. The artistic director and conductor is the Honored Artist of the Republic of Tatarstan Anna Gulishambarova, a graduate of the Kazan State Conservatoire named N.G.Zhiganov chair of opera and symphony conducting (class of professors F. Mansurov and V. Vasiliev).      The main direction in the activity of the orchestra is the performance of contemporary music by Russian and foreign composers of the 20th and 21st centuries, including the music of Tatarstan composers.       The Chamber Orchestra « New Music » is a regular participant of major international festivals of contemporary music, such as Mus-Tranzit (2003-2008), Europe-Asia (2004-2017), Classical Guitar in the 21st Century, (2012-2017), subscription concerts of the Center for Contemporary Music « Bravissimo » (2012-2017), « Sound spaces of Sofia Gubaidulina » (2013-2017), « Russian avant-garde in music and painting » (2014-2017). The team also participates in major republican projects: « Music of Faith », « KremlinLife », including charity concerts and promotions for children and students. The collective has repeatedly participated in the author’s and jubilee concerts of Tatarstan composers, presenting a wide panorama of the works of contemporary Tatar composers and also in joint musical projects of the Great Concert Hall named after S.Saidashev, Tatgafarmarmoniyim.G.Tukay, the National Museum of the Republic of Tatarstan, the State Museum of Fine Arts of the Republic of Tatarstan, Kazan Conservatory, and others.      The Chamber Orchestra « New Music » successfully performs in numerous concerts in the republic and abroad. So, in 2016-2017gg. the orchestra performed a program from the works of S. Gubaidulina, A. Piart and other contemporary composers in the chamber hall of the Moscow Philharmonic, at the Moscow Tolerance Center. The Chamber Orchestra « New Music » performs together with the leading Russian bands and well-known performers: Mark Pekarsky Ensemble, Moscow Modern Music Ensemble (MASM), Moscow Conservatory Ensemble « New Music Studio », La Primavera Orchestra, Bolshoi Theater soloists, musical theaters . Stanislavsky and Nemirovich-Danchenko and the « New Opera », etc.      The universality of the collective is that it can perform music of different styles, perform in various chamber compositions with the execution of classical and modern music. The string quartet of the Chamber Orchestra « New Music » represented the musical art of the Republic in Ankara (Turkey), in Cannes, France. 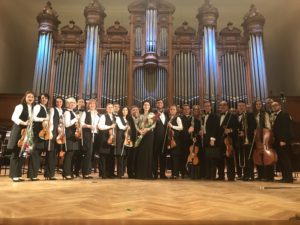 Anna graduated theNazib Zhiganov Kazan State Conservatoire in two specialties-violin and opera-symphonicconducting. As a conductor she studied inclass of Fuat Mansurov, who was afamousconductor of the Bolshoi Theater, professor, academician, national artist of Tatarstan, Kazakhstan and Russia.

In 2003, on the base of Contemporary Music Center named after Sofia Gubaidulina, shecreated the Chamber Orchestra « New Music ». The collectivespecializes in the modern musicperformance. During 15 yearsorchestra is a regularparticipant in the forums of modernavant-gardeart. Under the direction of Anna Gulishambarova, the orchestra is aregularparticipantofinternationalfestivals « Mus-transit », « Europe-Asia » and etc.Togetherwith the Kazan State ConservatoryAnna performed the world premiereof the opera “Apostle” writtenby American composerGammaSkupinsky.Under the guidance of Anna Gulishambarovaensemble went to the Contemporary Music Festival in Rhône-Alpesregion (France). In 2014 youngtatarcomposerElmirNizamov created opera « Kara Pulat ». Itwasdirected by the Honored Artist of the Russian Federation Georgy Kovtun (St. Petersburg) and Anna Gulishambarova. The operawasshowninMalyTheater (Moscow) and nominated for the National theatreaward « Golden Mask ». During last yearsAnna performed as a conductor in the State Kremlin Palace, Moscow Tchaikovsky Philharmonic Hall, Moscow House of Music, Samara State Philharmonic. Alsoshe conducted the Ulyanovsk Symphony Orchestra « Gubernatorsky », taught at the Kazan State Conservatory as aSymphony Junior Orchestra conductor. Several years ago Anna Gulishambarova conducted the Russian Youth Symphony Orchestra namedafter Nikolayev (Moscow) at the internationalfestival « Talent’s Commonwealth”. In 2017Russian Embassy in Albania organizedthe concert of Symphony Orchestra of Albanian Radio and Televisionin Tirana. Soloist – Elena Ayusheeva (soprano, Moscow), conductor – Anna Gulishambarova.

In 2013 Annawas awarded the titleofHonored Artist of the Republic of Tatarstan. In 2014 she won the contest « Woman of the Year » in « Culture and Spirituality » nomination. In 2017 Anna Gulishambarovabecame the first prizelaureateof the internationaltelevisioncompetition « Inter-Musa » in « conducting” nomination.Under the direction of Anna Gulishambarova the “New Music” Orchestra takespart in all important city and republican events. As a part of governmentdelegations, Anna regularlyrepresented the culture of the Republic of Tatarstan in Cannes (France), Leipzig (Germany), Zurich (Switzerland), London (Great Britain), South Korea, Turkey. The orchestra, leaded by Anna Gulishambarova, took an activepart in cultural program of the XXVII World Summer Universiade 2013, in the FINA World Aquatics Championships in 2015, the opening of the European Champion Judo in 2016 and manyother events.

In 2018, the orchestra celebrates the 15th anniversary. This year has begunwith a concert in the Great Hall of the Moscow Conservatory which is dedicated to the 90th anniversary of Fuat Mansurov. Inautumn“New Music” orchestra under the direction of Anna Gulishambarova plane to participate at the festival of modern music in Hanoi (Vietnam).

Pianist Andrey Rudenko is one of those diverse musicians whose talent is equally successful in several areas of music. He is an authority both in jazz and in the academic music community; the choice of the creative way brings together the best pianist of Kazan with such famous musicians of Russian music as Daniel Kramer, Leonid Vintskevich, Sergey Zhilin, Grigory fine.

In 1992-97 Rudenko studied piano at the Moscow Conservatory (classes of Professor Tatyana Petrovna Nikolaeva-Tarasevich and Professor Nikolai Arnoldovich Petrov). In 1999-2001, the musician is trained abroad at The Royal Irish Academy. In 2000 he became the winner of the international competition in Spain.

After returning to Kazan, he began his active performance, including as a leader, performing in a variety of ensemble formats. One of the most famous projects of Rudenko of those years is a duet with saxophonist Sergey Baulin, a graduate of the Kazan Conservatory. This line-up performed both standards and original music, and the manner of presentation allowed the press to characterize it as « intellectual jazz ». Rudenko became a regular at the Kazan jazz venues of those years-the Joker and Jolly Roger clubs.

Among the most famous jazz musicians with whom he had to work as a sideman – David Goloschekin, Dave Fleming, Michael and Richie Buckley. In those projects where the pianist was one of the leaders, his partners were vocalists Lilia Chugunova and Victoria Andreeva, bassists Andrey Dudchenko, Dmitry Solomatin and Oleg Solodovnikov, drummers Rafael Abdullin, Adel Sabiryanov, Eduard Nurullin. In addition to extensive tours with solo concerts, Rudenko took part in a number of festivals, including « Jazz province – 2003 » (Kursk-Kazan), the festival in Yekaterinburg (2002), « Jazz voices » (Moscow, 2004), « Jazz platform » (Samara, 2004), « USTU-khure » (Republic of Tyva, 2004) and so on. In Tuva, the pianist performed on the same stage with the legendary « Sun Ra Arkestra » (USA) and was awarded the diploma of the best pianist of the festival. 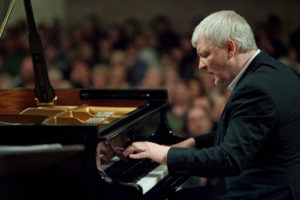 Rezeda Galimova is a Russian lyric soprano. Mrs. Galimova graduated from the Gnessin Russian Academy of Music in Moscow, Russia in class of “Solo Academic Singing.” Mrs. Galimova is a soloist of the State Orchestra of Folk instruments of the Republic of Tatarstan under the direction of maestro Anatoly Shutikov in “Tatar State Philarmonic named after Gabdulla Tukai.” In 2018, she received an honorary title of Meritorious Artist of the Russian Federation. She is the laureate of regional and international contests: Laureate of the International Delphic Games in Moscow in the nomination « Academic singing »; Laureate of the International Competition of Vocalists « Grand Price 2003 » in Italy; and Winner of the III Republican Vocalists’ Competition S.Saidashev (Republic of Tatarstan, Russia). Mrs. Galimova has performed at the Carnegie Hall, New York City’s most iconic music venues. Rezeda Galimova was awarded with a badge of honor by the Ministry of Culture of the Republic of Tatarstan, Russia « For the contribution to the Russian culture.” Mrs. Galimova participated as a part of delegations in Days of Culture of Tatarstan in Turkey, France, Finland, Czech Republic, Ukraine, Latvia, Estonia, Kazakhstan, Uzbekistan, Azerbaijan. Rezeda Galimova recorded a number of songs for the CD-series “Orchestras of Tatarstan.” Additionally, she recorded songs by Tatar and Russian composers for radio in Republic of Tatarstan, Russia. Reseda Galimova’s concert repertoire encompasses a wide range of classical and contemporary composers and the music of Tatar composers. Mrs. Galimova has performed and collaborated with Tatarstan National Symphony Orchestra (Tatarstan, Russia), the Chamber Orchestra “La Primavera”(Tatarstan, Russia), the Chamber Orchestra “New Music“ (Tatarstan, Russia), and Russian Grand Choir “Masters of Choral Singing,” conducted by Lev Kontorovich (Moscow, Russia). 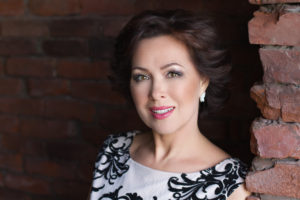 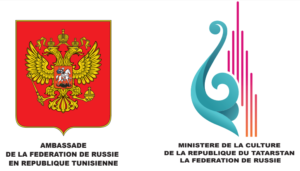